The rail line through Eatonia was one of the last branches to be surveyed and partially built by the Canadian Northern Railway.The incomplete line was taken over in 1918 by the Canadian Government Railways, with a construction camp appearing east of the new town site in the same year. Of the full complement of divisional point structures once at Eatonia, only the one-of-a-kind railway station built in 1925 and now owned by the town, remains. The station, a caboose and an Eaton catalogue house are the principal elements in the Eatonia Heritage Park, which still under development.

The branch is still owned by the Canadian Nation system and is still in use, serving producer car loading sites developed by West Central Road and Rail, a major player in the shipping of grains and oil seeds. Other transportation links serving the town are Highway 44, originally routed a mile north of the town, and Highway 21, which was not taken into the provincial system until long after Eatonia was settled. 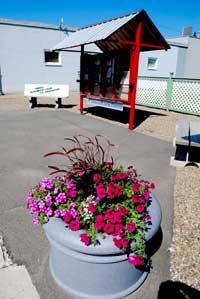 Originally called Eaton after Sir John Eaton of the T. Eaton Company, the name of the village was changed to Eatonia in 1921 to avoid confusion in postal addresses with the nearby town of Eston. The railway chose Eatonia as a divisional point because of high volume spring located close to the village. This spring sustained the infant village throughout the Dirty Thirties. It is still in use, along with a number of other wells.

Eatonia is located on a quarter section of land once owned by Ole Iverson, an early homesteader. It became a town in 1954, with Frank Corcoran, the first station agent, as mayor. Because of its access to a dependable water supply, the town of 500 is an "oasis", with a large urban forest, paved streets and other amenities which are rare in other towns of the same size.

Eatonia lies at the heart of a flyway which produces an annual harvest of migrating ducks and geese. There are also significant numbers of deer and antelope in the surrounding countryside.

Along with nature's wealth comes a genuine hospitality which makes Eatonia one of the most welcoming communities in West Central Saskatchewan. Tourists will be impressed by all of the well-maintained amenities, which include a new community hall and swimming pool, both state of the art, K-12 school, health centre and seniors' home, churches and air field. 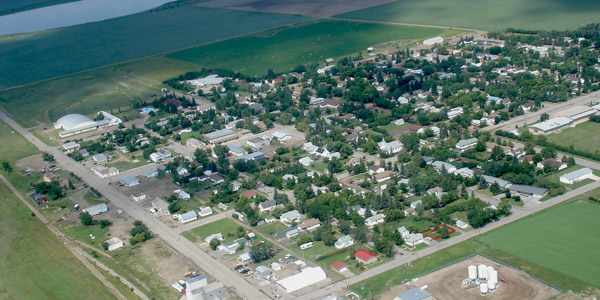 Eatonia is the only town within the boundaries of the R.M. of Chesterfield, which was created in 1968 by the amalgamation of the rural municipalities of Royal Canadian and Mantario. The larger municipality consists of 22 townships and has a population of over 500. Farming is the primary industry, with grain, oil seeds, specialty crops and livestock production. Recent development of oil and gas resources in the north and west of the RM has been of great benefit to the local economy. 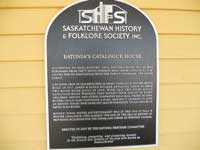 Most of the early history of the area lies in the old R.M. of Mantario. The name Chesterfield comes from the Chesterfield Houses, five fur-trading posts built near the forks of the Red Deer and South Saskatchewan Rivers in the 19th century. The first was a Hudson's Bay Company post built in 1800. The short-lived settlement of Rivire La Biche (1878-1885) was also near the Forks. It had the first school and the first church in this part of the province. The first rancher was at the Forks in 1880 and the first farms were established at the settlement in the same year by Pierre and Gabriel Leveill, Metis grandsons of Sir Alexander Mackenzie.

Until the homesteading era, most of the old Mantario municipality was rangeland. In 1910, the Jewish Colonization Association brought settlers to very poor land near the hamlet of Eyre.

The Municipality of Chesterfield is home to a Hutterite colony, a market garden and an orchard. There are numerous artists and crafts people, with the most well-known establishment being Sagebrush Studios, north of the ferry which crosses the river to the ghost town of Estuary. Besides Eatonia, the old railway settlements of Mantario and Eyre are also in the R.M. of Chesterfield. Centers outside the municipality are Kindersley, Alsask, Empress and Leader.